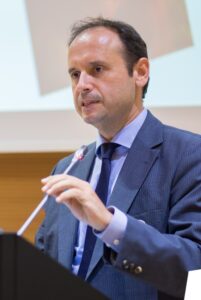 George Katsouranis currently holds the position of General Manager and Deputy Group CHRO in Group Human Resources, while at the same time he is the CEO of the Centre of Sustainable Entrepreneurship Excelixi S.A. in Piraeus Bank Group.

He actively participates in business fora, think tanks, networks and committees. Until recently he served as a member of the Board in GAIA Epicheirein S.A. and in Hellenic Management Association (EEDE) and while being President at the Hellenic Institute of Human Resources Management (EIMAD).
He holds an MBA from ALBA Graduate Business School and a BA degree in International and European Studies.