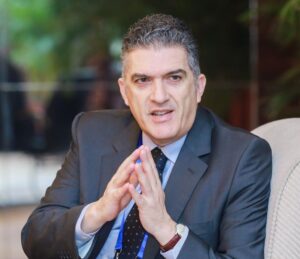 George Drakopoulos is the Founder & CEO of Tourism Generis, a consulting company that supports decision-makers in tourism, based in Athens, Greece.

Specialized in:
• planning and development for tourist destinations and businesses
• lobbying for Tourism
• Public-Private Partnerships for tourist promotion
Worked in:
• various positions in hotels in Greece (1981-1993)
• Greek Tourism Confederation-SETE, as Project Manager (1994-1997) and then as Director General (1997-2014)
Served as:
• Counselor in the European Economic and Social Committee (2010-2015)
• Chairman of the Affiliate Members of the UNWTO (2012-2013)

During the period 2014-2017, he served as a Special Adviser to the Secretary-General of the United Nations World Tourism Organization (UNWTO) in PPP (Public-Private Partnerships). As of 2018, he cooperates with the UNWTO as an Expert Consultant and as of 2019, he is SMEs Adviser at the European Bank for Reconstruction and Development (EBRD).
In 2015, he founded Tourism Generis.

He has delivered speeches and presentations in more than 420 national and international conferences in more than 35 countries, while he has produced 50 studies/publications and 700 articles about Tourism.

He holds an MSc in Tourism Studies from the University of Surrey, UK. He has also studied Tourism Management, Technological Educational Institute in Athens, GR, and trained in Hotel Management in International Centre of Glion, CH.