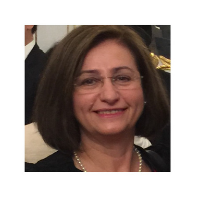 Member of the MSM LT and the EMEA MEDICAL AFFAIRS LT

As Managing Consultant of MGC Consulting Services she provides support and consultation in the areas of her expertise: pharma research & development, regulatory, compliance and medical affairs.

Chemist of University of Athens, holding a Pharmaceutical Physician Diploma from the Basel University, Switzerland, and having 20-years of working experience as Director of Medical, Scientific and Drug Quality and Regulatory Affairs.

Experienced in working with the local Health Authorities having worked with IFET (National Institute for Pharmaceutical Research) and EOF (National Medicines Organization) (1989-1992) and various multinational pharma companies. In 1992 she joined Cilag / Pharmaceutical Division of J&J Hellas, as Scientific Affairs Manager and later on, as Medical Director. In 1997 she joined ROCHE HELLAS as Head of Drug Regulatory Affairs. In 1999, she joined the Janssen- Cilag Pharmaceutical SACI as Medical Affairs Director, a position that she holds until today.

Experienced in leading international teams and functions (2006- 2010) as Pharmacovigilance South Area Head and QMS Coordinator for ESEM (Europe South East Middle East).
From November 2015 until December 2018, she was the Coordinating Medical Director for the Mid-sized Markets (MSM) of Janssen and the EMEA MAF Disclosure Leader. In this critical role, she was driving Medical Affairs excellence across MSM countries having the oversight and coordination of the respective MAF functions. She represented the MSM countries in the EMEA Medical Affairs Leadership Team and coordinated the RWE initiatives with HEMAR and other involved functions.

She is a member of KEMEL, and a Mentor in a number of research-based start-up teams.

She was elected President of the Hellenic Association of Pharmaceutical Physicians for 6 consecutive years (June 2011- June 2017).